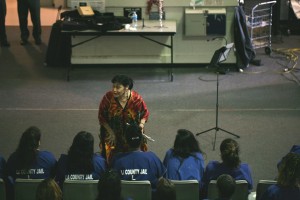 For more than a decade now I have worked outside the concert-hall circuit under the banner of FLAUTA SIN FRONTERAS, taking music to those who most need it and who very often are not able to attend formal concerts. I have played to the young, the old, the disabled, the disadvantaged and to many who are in prison. All the audiences are rewarding, each in its own different way, but to play for those who do not have their freedom is in many ways the most touching – one never leaves  a jail without leaving a little bit of one’s heart behind.

I have played in all of the dozen or so jails in Mexico City on a number of occasions and have got to know some of the inmates quite well! Occasionally, someone will come up to me after a concert (outside!) and say “Remember me? I met you at such-and-such a jail and you said to come to your concerts when I got out!” A couple of years ago I made a tour of twelve jails in the State of Puebla which was particularly interesting since most of them were very small and were all in the centre of the towns. Sadly over-crowded – and in every case there were a small number of women who were incarcerated, all living in a single room and only allowed out for half an hour a day.

Now, whenever I go to a new city I try and stay an extra day to give a concert in the nearest jail. I have played in one of the toughest jails “El Hongo” on the border between Tijuana and Mexicali and most recently, when I was last in Oaxaca I played in a juvenile offenders detention centre under the auspices of the Alfredo Harp Helú Foundation. There are new lessons to be learned from each one – and at the same time I feel a responsibility to bring not only music but also hope and, hopefully, a little inspiration. 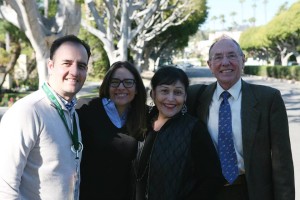 In the week before Christmas I had the opportunity to make a short tour of Detention Centers in both San Diego and Los Angeles, organised by the Mexican Consulates in both cities. These were the first American jails I had visited and were very different in many ways to what I have found in the Mexican jails – on the other hand, the need for music and hope is omnipresent no matter which country the jail is in.
After my regular concerts I always go straight to the foyer to greet the public – so, in the Detention Centers, I always go and greet every member of the audience: it’s not enough to simply play and leave.  Added to which, I like to learn as much as I can about each individual facility – it is also important to play for those who work in the prisons, as well.

In one prison I was told that I could not touch the prisoners (it was a women’s detention center) and I negotiated that I could least shake hands. However, the women indicated that they wanted a hug so I told them: “I’m not allowed to hug you – but you can hug me it you like!” and they all did!

I am told that a number of other Mexican Consulates in the USA want to organise similar visits and I am looking forward to working with them and making a another tour in the Spring. I will also be going back into the jails of Mexico City to meet with old friends!

For me, it was a great way to end 2015. I felt that it was a holiday gift to myself and rewarding in so many ways. As a musician, it enables one to reinvigorate my sense of story-telling through the sound of the flute and through thematic itself. I owe a great debt of thanks to the Mexican Consulates General in both San Diego and Los Angeles for this very special Christmas present! 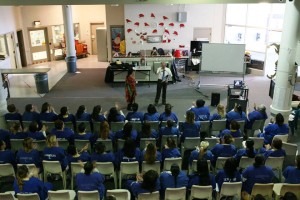 Welcome 2016! Ask yourself where you can perhaps involve yourself in your community!

Watch this video to learn more about Flauta sin Fronteras.