The big news of August was our trip to Rancho Puerta which was preceded by three days in San Diego. We have a special AirBnB (Athena-Rae and Bo Hart) where we have stayed a number of times. The highlight of this visit was to spend an evening with our great friend Dame Zandra Rhodes, Britain’s leading designer and a dear friend for more than forty years. One of our favorite things when we stay at Athena Rae and Bo’s is to shop at the Mexican supermarket over the road and make a Mexican feast – and we put together an extra-especial one for Zandra! One other interesting aspect of this trip was to fly into Tijuana (cheaper than flying into San Diego!) and to use the new foot-bridge over to the USA. It was very easy and quick (without lines!) and when we ordered an Uber it was there in two minutes! 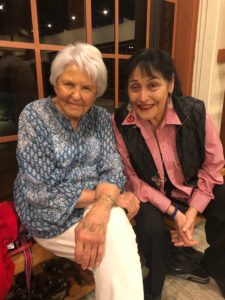 On Saturday we arrived at Rancho la Puerta as the guests of the President, Sarah Livia Brightwood, daughter of the founder Deborah Szekely. For me it was the sixteenth time I have been and it was even more beautiful and peaceful than ever. It truly is paradise on earth and we enjoyed a really wonderful week, all the better, this time, since I was not performing, just preparing for the forthcoming season. A very nice surprise was that the distinguished conductor James Conlon was also there, giving two very inspiring talks, with his wife Jennifer – whose wedding Michael and I attended in St Patrick’s Cathedral in 1987! We had not seen them for many years so it was a very special reunion. Another delight was to make two new friends, Rancho first-first-timers Jason and Adriana Murray, from New Zealand, whom we look forward to seeing again one of these days, sooner rather than later!

If you don’t know Rancho la Puerta check out the website (rancholapuerta.com) – it’s really worth it! In the Ranch bookshop I discovered an incredibly beautiful book of writings and photographs by Emily Brightwood which was published in her memory by her mother Sarah. Emily was tragically killed in a car accident four years ago when she was just seventeen and this publication WHERE I BELONG is a beautiful memory of her. I urge you to go to her website (www.emilybrightwood,com) and either download the pdf version or else order the print version of the book. Emily was a wonderfully creative bright young star and was also a flute-player.

My first engagement of September was being on a jury for the Queretaro Philharmonic. Young Mexican soloists (playing Mexican music) were being auditioned for an opportunity to appear with the orchestra under its outstanding young conductor Ludwig Carrasco, himself a one-time child prodigy violinist. In the end, the worthy winner was Carlos Enríquez, playing the Zyman Flute Concerto No 1. However, he didn’t win because of my vote: he was the unanimous choice of the conductor and the rest of the jury! Bravo, Carlos!

From Queretaro we went on to Guanajuato, one of my favorite towns in Mexico, where I was to play the Arturo Márquez Concerto with OSUG, the University Orchestra and now, under its enterprising conductor Mtro Roberto Beltran, one of the best orchestras in Mexico. I always enjoy being in Guanajuato because I get to hang out with Mtro Cuauhtémoc Trejo, Principal Flute of the orchestra whom I have known since his teenage years. On this visit I also got to work with two new additions to OSUG, Rubén Ramírez & Laura Gracia who have both recently joined the orchestra. They are both very talented young flute players with bright futures ahead of them and both of them, incidentally, play Pearl flutes! My conductor on this occasion was a young Venezuelan Conductor Mtro Raúl Aquiles Maldonado who is really excellent (and he has already invited back to work with the orchestra!) I very much enjoyed working with Mtro Raúl and we were very happy to attend his wedding two weeks later.

The concert in Guanajuato took place on the 14th and on the morning of the 15th we flew back to Mexico City where I was scheduled to give a concert with Mtro Salvador “Chava” Merchand in Plaza Carso. I love playing there because one always encounters a very different public – this is really FLAUTA SIN FRONTERAS and truly takes music to the people. Two days later I started rehearsals with the Bellas Artes Chamber Orchestra for a series of concerts of Mexican music in some of Mexico City’s detention centers. I have been playing in these ‘reclusorios’ for more than a decade now and find concert giving there very rewarding. On this occasion, I was playing a set of arrangements especially made for me by the multi-talented Edgar Ibarra (who just made the arrangements for the new production of Grease and who is also the music director of the new production of Hello Dolly). The conductor was Mtro Rodrigo Cadet whom I loved working with, indeed it was a very happy couple of weeks being back with old friends of OCBA, which has become a major music force under the baton of Mtro José Luis Castillo.

During the course of these concerts we went to the home of our old friend, Abraham Alvarado, whose son Israel holds a Christmas Sale every year of items he has made or painted and we brought several pictures for ourselves and several for presents. He is saving for a new clarinet!

October brought a new adventure, visiting the mining communities of Rodeo and Cienéga and spending a week in Durango City working with the flute teachers and the students of the two Esperanza Azteca Orchestras. As always I find working with the teachers and the students of OSEA very inspiring and Durango was no exception. There was to be a concert in Teatro Ricardo Castro on the Tuesday but because of impending hurricane Willa (which never arrived!) the Governor closed all schools and cancelled concerts… well, next time! From there we drove to Rodeo a town of four thousand which is preparing for a new Fresnillo mining facility. I was asked to play at the Rodeo Reina de la Fiesta competition which was great fun and the next day I played at the Rodeo Technological University for another enthusiastic audience of young people.

From Rodeo we drove to Torreón from where we flew – in a six seater plane – to Cienéga high up in the middle of the Durango mountains. It is a remote but very beautiful location and I enjoyed playing for families and, the next day, for three hundred young people. The scenery reminded me of Northern California and at the back door of our casita was a nature reserve with a lot of young deer. It was magical and a very special experience. On our last evening in Cienéga we were visited by a group of “Trick or Treaters” but when I came to the door to give them some candy I was surprised because several of the group had been to my concerts – they, too, were surprised to see the Flute Lady again!

The adventure was sponsored by Fresnillo Plc who invited me to visit the location of two of their mines. Dame Judith Macgregor, former UK Ambassador to Mexico, is now a director of Fresnillo Plc and she suggested that I could visit some of their sites. It was a really fascinating trip and I have already been invited to visit other mining communities in Sonora, Chihuahua and Zacatecas in the New Year. It was a treat to work with such a professional group under the leadership of Exequiel Rolon and including Brasilia Lira, Alicia Sanchez and Alfonso Conde with Gabriela Briseño in Rodeo and Vanessa Fernández in Cienéga. We flew back to Mexico City on 1 November to find the city totally without water! We had stored a lot of large bottles of water before we left so we could do some hand-washing but…

We are now preparing to leave for Cuba in two days’ time since I am playing Arturo Márquez’ CONCIERTO SON with the composer conducting the National Symphony of Cuba in the Teatro Nacional. It’s my first visit to Cuba so I am very much looking forward to it – and especially to having a bath! I’ll tell you about it in my next blog!

With love from Elena