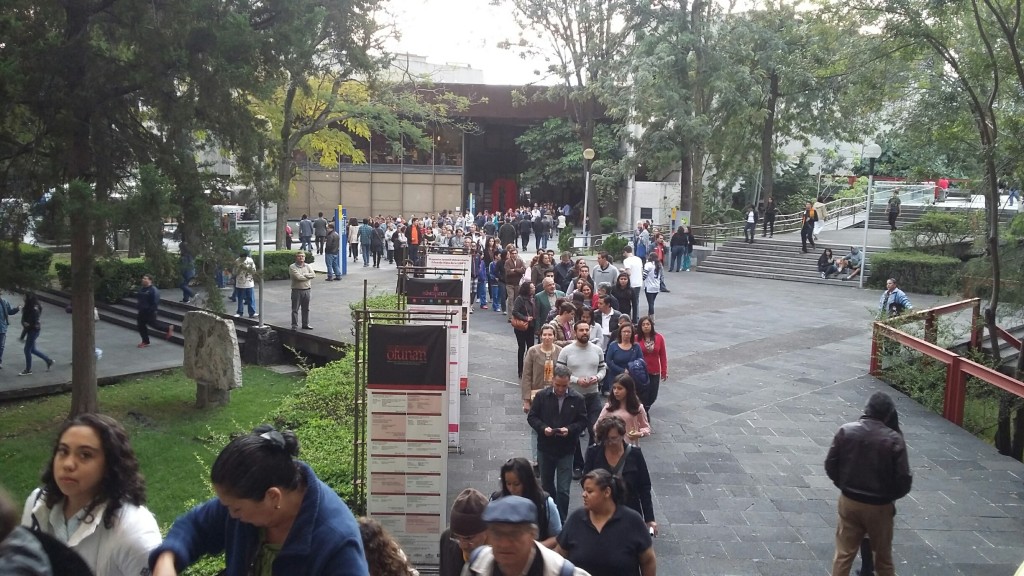 Elena Durán returned to the Sala Nezahualcóyotl (UNAM) on Sunday with the Edgar Ibarra Trio to give her very special performances of music by Queen and The Beatles in this year of UK IN MEXICO 2015. Elena is well known as one of the leading flute players on the international concert platform and The Edgar Ibarra Trio (Edgar Ibarra, piano; David Rosas, Bass; Salvador “Chava” Merchand, drums) comprises three of Mexico’s most accomplished musicians.

An enormously enthusiastic sold-out audience of more than two thousand filled the hall to capacity and enjoyed an evening of music-making at the highest level. The evening got off to a lively start with Elena and the Trio offering a Rock and Roll Medley by British arranger Laurie Holloway (a long time music partner of Elena and onetime music director of the Parkinson Show on BBC TV).

This was followed by a magical set of songs by Queen starting with We are the Champions and ending with We will Rock you with a heart-rending Love of my Life, a Crazy Little Thing Called Love and a highly charged Bohemian Rhapsody in between. Introducing “Bo Rap” as Queen themselves nicknamed it, Elena talked about the invaluable work of AMISTAD BRITANICO MEXICANA and the fact that she was recently named Amistad’s Cultural Ambassador.

Next came a Beatles set, opening with their first big hit Love Me Do which was followed by the reading of a poem for DIA DE LOS MÚSICOS by drummer Salvador Merchand which lead into an incredible performance of Blackbird. Paul’s favourite song, Here, There and Everywhere was dedicated to ESPERANZA AZTECA and its amazing network of youth orchestras. Elena recently played with their Puebla Orchestra and next month will attend the inaugural concert of their Los Angeles Orchestra.

A set of Paul McCartney songs came next with a special dedication to the musicians of Eagle of Death Metal who were performing at the Bataclan Theatre in Paris when the gunmen struck and killed so many. Michelle, Mull of Kintyre, Penny Lane and Ebony and Ivory all preceded an amazing and extended performance of Hey Jude in which the audience played a significant role.

And so to the last set of Beatles songs, starting with All My Loving which was followed by the perennial favourite Yesterday. Eleanor Rigby and a hugely energetic performance of A Hard Day’s Night preceded the final item of the published program, Norwegian Wood.

As was to be expected, the audience wouldn’t let the musicians go and Elena offered a real treat with something very different. She told us that last week she played for the 70th Anniversary of UNESCO in Mexico and chose to play Gracias the last song which José Alfredo Jiménez ever wrote. José Alfredo sang this song on television one week before his death forty one years ago, almost to the day, to give thanks to his audience for his career. Elena and pianist Edgar Ibarra offered their special thanks to their colleagues David Rosas (Bass) and Salvador Merchand (drums), to the audience and finally to UNESCO for its wonderful work all over the world.

It was an incredibly touching moment, especially when they moved seamlessly into Imagine, which truly brought the house down with Elena’s heart-rending performance! A final encore was a reprise of We Will Rock You in which the audience participated enthusiastically – but again we were in for another surprise when Elena left the stage, still playing, and climbed the stairs towards the foyer… she was followed by Edgar, by David who continued playing his bass and by Salvador “Chava” Merchand and all the while the audience was singing and clapping rhythmically until the final moment when the musicians chorused “WE ARE THE CHAMPIONS!” What a night! What an experience!
If you missed it, look out for Elena and the Trio’s return to Sala Nezahualcóyotl on 7 February when they present their new show BRAVO BRUBECK! BRAVO BOLLING! a not-to-be-missed homage to two great jazz-men!